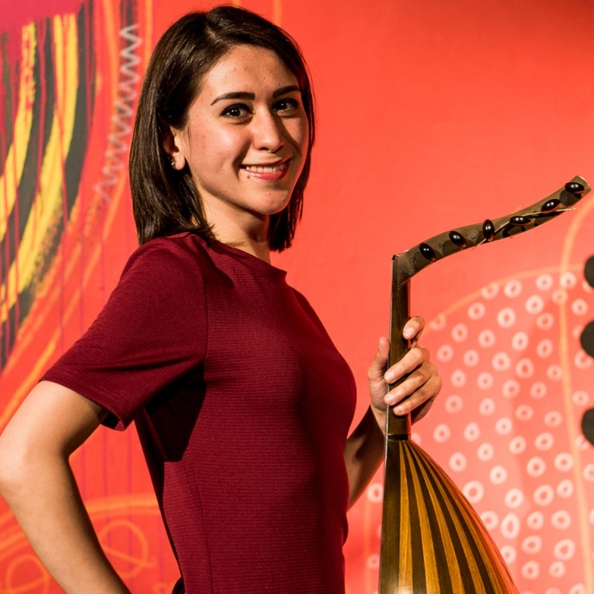 Rihab was born in the Syrian city of Homs to a musical family. She continued her musical quest later at the Conservatoire of Damascus and was taught by masters of the oud in Syria including Prof. Askar Ali Akbar, Issam Rafea, Mohamad Osman and Ayman Aljesry.
The influences at the Conservatoire included Azerbaijani, Arabic, Turkish and Western classical music which allowed Rihab an understanding and practice of various genres. In 2014, She became the first woman oudist to perform accompanied by the Syrian National Orchestra for Arabic Music. Rihab was the oud player of the “Syrian Female Oriental Takht” from 2006 until 2015, the year in which she moved to the UK.
Arts Council England recognised her as a musician of “Exceptional Promise” in December 2016. Since 2015, Rihab has performed in festivals such Greenbelt, Journeys International and she debuted her ‘Zamaan’ trio in Wales in September 2017. Rihab has performed at iconic spaces in the UK such as the Royal Albert Hall, Southbank Centre, Lambeth Palace, St. Paul’s Cathedral, The British Museum and also at The National Museum of Denmark. Rihab toured with the London Sinfonietta in Autumn 2018.